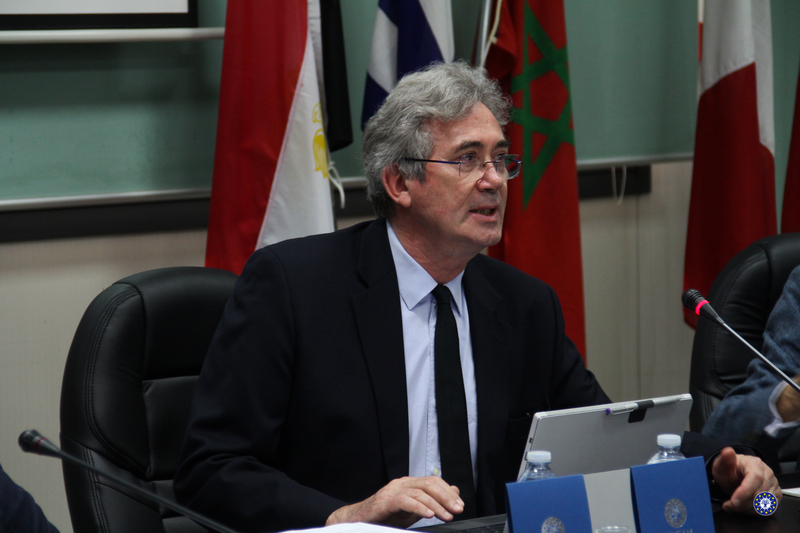 Plácido Plaza is an Agricultural Engineer from the University of Louvain (Belgium) with an extensive experience in applied agronomy both in Latin America and in the Mediterranean. Principal Administrator at the General Secretariat of CIHEAM, he has a long experience in coordinating research networks with universities, research bodies and institutions on Mediterranean Agricultural and Natural Resources-related issues. He has also managed EU-CIHEAM cooperation programs and coordinates educational and research activities in CIHEAM General Secretariat. Passing away of Cosimo Lacirignola, Secretary General of the CIHEAM

With emotion and sadness, the CIHEAM announces the passing away of Cosimo Lacirignola, Secretary General of the CIHEAM, on the 2 January 2018, following a sudden and serious illness.

The first thoughts of the Governing Board, the Advisory Board and all the officials of the CIHEAM go to his wife, his children and close relatives.

Cosimo Lacirignola was a peace builder and a strong advocate of the sharing of knowledge in the Mediterranean.

As a major actor in the field of cooperation and sustainable development, he was a tireless activist for Mediterranean dialogue.

He bequeaths to the CIHEAM a vision and a commitment that the CIHEAM will eagerly intends to develop.

Born on the 31 mai 1957, at San Pietro Vernotico, in the Apuglia region (Italy), Cosimo Lacirignola was married and father of three children.

Signature of the Memorandum of Cooperation with the French Institute for Agricultural, Forestry, and Veterinary Sciences (AGREENIUM), Paris, 22 June 2016 (French).

33rd FAO Regional Conference for the Near East, FAO-CIHEAM Side-Event “Planting the Seeds of Sustainability from Production to Consumption in the MENA Region” Rome, 11 May 2016 (English).

Declaration of the Secretary-General at the FAO, Signing ceremony of a MoU between FAO and CIHEAM, 15 October 2015.

International meeting, "A sea of dialogues - Development of Coastal Communities of the Mediterranean: Analysis, Strategies and Prospects” organised by the CIHEAM Bari with the support of the Italian Cooperation, Tricase, 6-7 October 2016.

High-level international seminar on the monitoring of the bacteria Xylella Fastidiosa organised by the Near East Plant Protection Organisation (NEPPO) in Bari, 19-22 April 2016.

United Nations Regional Conference (FAO-GFCM) on "Building a future for sustainable small-fisheries in the Mediterranean and the Black Sea", Algiers, 7-9 March 2016.