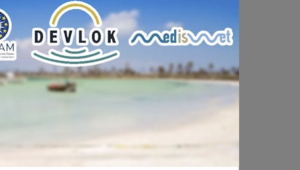 PARTNERSHIP AGREEMENT BETWEEN THE WWF-NA AND THE CIHEAM MONTPELLIER

Tunis, 20 January 2021: The World Wide Fund for Nature, WWF North Africa and the Mediterranean Agronomic Institute of Montpellier (CIHEAM Montpellier) signed a partnership agreement to enhance the synergy of their interventions in the Kerkennah territory aimed to better implement their strategies related to plastic waste management and the preservation of island wetlands.

The CIHEAM Montpellier and WWF NA pursue a common goal that consists in supporting the depollution of the Kerkennah Islands from plastic waste in the framework of the implementation of the “Kerkennah Plastic Free” strategy developed by the DEVLOK project funded by the Delegation of the European Union in Tunisia and also the conservation strategy for small wetlands in islands led by the project MedIsWet “Mediteranean Wetlands” funded by the MAVA Foundation.

Tunisia is the fourth lowest consumer of plastic products per capita in the Mediterranean. Nevertheless, in 2016, the country exported 11% (38 kT) of its plastic products to the Mediterranean and generated 0.25 million tonnes of plastic waste, of which 0.05 million (20%) was not collected and 0.20 Mt (80%) were collected for processing. 0.15 Mt (60%) of this plastic waste was sent to landfills, 0.04 Mt (16%) was discarded in the wild and only 0.01 Mt (4%) was recycled. Consequently, the Tunisian economy loses around 20 million $ per year due to plastic pollution that affects both the tourism and fishing sectors [1]. Today, wetlands are the main points of accumulation and transmission routes of plastic from one ecosystem to another. Indeed, rivers carry the majority of plastic to oceans and lakes, which can be considered as an excellent, place for the accumulation of plastic both in the short and longer terms.

However, wetlands also play an important role in supporting the whole ecosystem by storing flood water, improving nutrient cycles and contributing to the purification of many pollutants.  In addition, the biochemical conditions of these ecosystems are proving to be an important factor in the recycling of a broad spectrum of chemical nutrients through the inflow and backflow of marsh water.  With all these advantages, if the wetland is somehow polluted or contaminated with a critical rate of pollutants, the ecosystem mitigates several adverse effects on its surrounding environment.

In Tunisia, the majority of plastic waste is transported by inland wetlands and ends up in coastal wetlands. Rivers carry 7% of the Tunisian marine plastic (Medjerda is the main river causing marine plastic pollution in Tunisia, especially around its delta near Tunis) [1].

The situation in the Kerkennah Islands

The production of plastic waste in Kerkennah is estimated at 7,000 tonnes per year [2]. The existence of a single approved private collector and the recent opening of the controlled landfill do not enable to limit this pollution and prevent it from invading public spaces and the land and sea environment.

This omnipresent pollution has become a major environmental and health issue. Like many fisherman confirm, the presence of plastic in the seabed destroys the living environment of various marine species and, through its decomposition, threatens the health of consumers. Furthermore, this pollution strongly impacts the tourism sector by disfiguring the natural landscaped of the archipelago. In doing so, it also compromises the economic future of the island, which is mainly based on these natural resources.

The two partner organisations have decided to combine their efforts to set up a local plastic pollution management chain in Kernennah with the threefold purpose of treating existing litter, increasing volumes of waste treated and reducing the volumes of waste produced. The implemented actions will be of three different types: