First Workshop of the SmartAl project

The CIHEAM-IAMM, as the coordinator of the SmartAL Project, and the consortium members (University of Agriculture of Tirana, European University of Tirana, Panteion University, Athens, University Paul Valery, Montpellier) were welcomed by the University "Fan S. Noli" Korçë, also member of the consortium, on March 15 & 16, 2018.
They attended the first Design Workshop of this project which aims at carrying out a Master in European innovations for a sustainable management of Albanian territories, rural areas and agriculture in the context of the decentralization process as well as the accession to the European Union process.
Prof. Dr. Ali Jashari, Rector of the University "Fan S. Noli" Korçë, declared that "the project is important and interesting for the University of Korçë as well as for a region in which agricultural development is a priority".
Magali Maire, Coordinator of the project at the CIHEAM-IAMM, after thanking the Rector for his warm welcome, underlined at this stage "her confidence in the project because of the strong commitment of the consortium members for the creation of a Master's degree which will have to answer the needs in terms of employability of young people in Albanian rural territories". 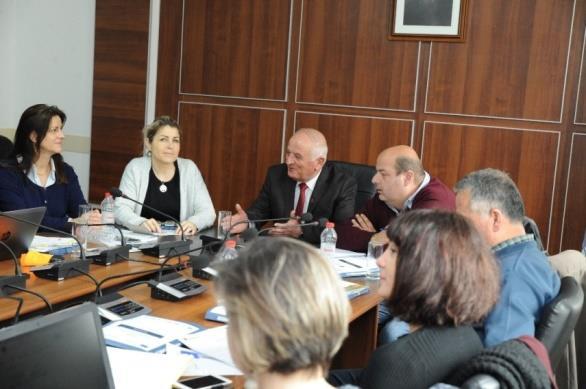 This 3-year project (2017-2020) is co-financed by the European Commission / Erasmus+ Capacity building in the field of Higher Education. It also involves the University of Hohenheim and the European Alliance on Agricultural knowledge for Development "Agrinatura".
➡ Read the Article of the University Fan S. Noli
➡ More information on SmartAL